South Florida comic Mark Christopher explains his apporach to comedy and his love-hate relationship with the law.

When not performing stand-up comedy in South Florida, Mark Christopher can be found practicing law. (Photo by Applause Break/Chuck King)

DELRAY BEACH – Fans argue with Mark Christopher at their own peril.

Along with being one of South Florida’s funniest comics, Christopher is also a practicing lawyer – although, he doesn’t always see that as a positive.

Christopher gave up his comedy career after a little more than a decade to pursue a career in law. After a detour or two, Christopher is back on comedy stages and his career as an entertainer is once again gathering momentum. Recently he featured for Joe Bartnick on a series of South Florida shows.

One of Applause Break’s missions is to help the South Florida community better get to know some of the area’s top comedians. With that in mind, we’ve launched a series of Question & Answer sessions with some of South Florida’s funniest comics. Fans interested in seeing Mark Christopher perform live can catch a  quick set at the Pompano Beach Brewing Company on Friday, May 27. He’ll be headlining the Monday, May 30 show at the Tin Roof in Delray Beach.

APPLAUSE BREAK: Why did you start performing stand-up comedy?
MARK CHRISTOPHER: I’d loved comedy since I was a little kid but didn’t really think about doing it as a career until I sat down one day and thought about how I wanted to earn a living. All the usual jobs seemed like one degree or another of physical or psychological torture. So I landed on stand-up.

AB: Who is your favorite comic and why?
MC: When I was a kid, I probably watched Bill Cosby Himself 40 or 50 times. (What ever happened to that guy?) And when I first started comedy in 2000, I listened to Woody Allen’s stand-up CD pretty much constantly.

I’m a big fan of Steven Wright, Mitch Hedberg, Todd Barry, Dave Attell, Brian Regan, Sarah Silverman, Anthony Jeselnik, Gary Gulman, Nikki Glaser and John Mulaney. As far as recent specials go, Earthquake’s and Taylor Tomlinson’s were both really strong. But the guy who probably influences my joke writing more than anyone else is Emo Philips. I love misdirects, particularly when they take the audience to a dark place where 80% of them are laughing, 10% are in stunned silence and the last 10% are muttering “Oh my God. Oh my God.” And Emo’s the master at that particular type of joke. 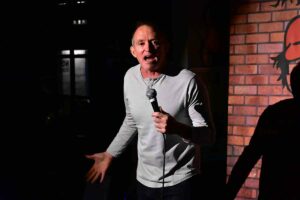 AB: What do you do when you’re not performing stand-up comedy? What is your job and hobby?
MC: I am an attorney by day. Long story. I left comedy in 2006 to go to law school. Practiced in NYC for a few years, hated it, and left the law to become a scuba diving instructor on liveaboard dive boats. Then, a law school friend lured me back into legal practice but, once I was back on land, I got the comedy bug again. That was 2019 and I’ve been doing sets nightly (or close to it) ever since. Hopefully, comedy will eventually allow me to quit the law (again).

AB: What’s the worst job you’ve ever had and what made it so bad?
MC: Being a lawyer. Ungodly hours and unrelenting psychological torture. The level of focus required to do the job well leaves no room for joy in the human soul. Days spent in legal practice are simply days unlived; you might as well just delete them from the accounting of the time you have spent in the realm of the living. Some lawyers may disagree, but only when sober.

AB: How often do you write? What’s your process and inspiration?
MC: I would love to say every day but it’s closer to the truth to say a couple of times a week. I used to just sit in front of my computer and brainstorm. Now I would say I do at least half of my writing while rehearsing. When going through a bit, I’ll often get a sense that there is room for it to grow in a particular direction, and I’ll try to push it in that direction. I just keep asking “what else? what else?” But as soon as I come up with something, I will transcribe it into the master joke document I keep on my laptop. The document is a bit of a mess with no real system of organization. It’s just TITLE OF JOKE followed by Text of Joke for 245 pages of Calibri 11-point font.

AB: What’s your pre-show routine?
MC: I usually write out or print a set list on a piece of paper. (My vision is too bad to be able to read off my phone.) But to be honest, I don’t really look at the set list on stage or, if I do, I wish I hadn’t. It usually doesn’t help and invariably my set loses energy. But I do like having the set list with me before I get on stage just to remind myself of what jokes I plan to tell. Other than that, I don’t have any particular ritual. I do like to get to shows on the early side, get a feel for the room, etc.

AB: How do you dress for a performance and why? Describe your look.
MC: My current on-stage look is just my regular off-stage look: “guy trying to dress younger than he is and kinda sorta pulling it off.” I’ve been thinking about evolving into something “quirkier” on stage, say, “practical steampunk” or somesuch.

AB: What’s the best comedy movie ever and why?
MC: “Raising Arizona.” An unfairly overlooked Coen brothers masterpiece. So many hilarious situations elevated to another plane by hilarious dialog.

AB: How does your dream performance go?
MC: I do the jokes I plan to do and they all work, and the jokes the audience likes best are also my favorites. I never say “give it up for blah blah” or any other nonsense like that.

AB: What’s the strangest thing a heckler has ever said to you? How did you respond?
MC: The very first time I did stand-up, I made some comment about lawyers (I can’t remember what but it wasn’t nice) and an audience member asked me some sort of question about what we should do as a society given that we have too many lawyers. I said something about tying each lawyer to a (insert the name of some unpopular profession here) and throw them into the sea. All heckles since then have been much more mundane.

AB: What’s the weirdest thing that’s ever happened to you at a show?
MC: Guy stood at the front of the stage threatening to kill my friend, who was on stage at the time. I wasn’t sure what the right course of action was. Luckily, the guy calmed down before my friend’s set ended.

AB: Where do you see your comedy in five years?
MC: I think that, for a long time, my performing lagged behind my writing. So there were a lot of jokes that I thought were good but I couldn’t get them to work. That doesn’t happen as often. Of course, I still write some utter garbage but generally, if I write something that makes me think “oh yeah,” I can usually get it to work, eventually. And that really opens up my writing. I feel that I can take bits farther, take them to stranger places, etc. So I’d like to think that, if I looked into a crystal ball and saw my act in 5 years, I would say “whoa. how did I come up with that?” Of course, I might just be dead.

AB: What else should comedy fans know about you?
MC: They shouldn’t care about me at all. Watch my act.

To Recovery, And Beyond Before South Florida comic...

Holding The Trump Card Unlike most conservative-leaning comics...

If you are a #sloth, you don't want to run into Nadeem Awad. Seriously. He'll punt you. What will he do tonight at the @BiergartenBoca? Come to #BocaRaton and find out. #Boca #SFLComedy #ThanksgivingEve @applausebreakcomedy https://www.instagram.com/reel/ClTzgh7uqRq/?utm_source=ig_web_button_share_sheet

Why would #SouthFlorida comic @DannyFallonhaha want to document a set that leans heavily on adventurous experiences from his personal road to #recovery? #soberlife He discusses that, and what's next, here. https://applausebreak.com/turning-the-page-danny-fallon/