Following a delay of more than one year, local comic Carl Rimi begins shooting his movie iPossessed next week in central Florida.

When Rimi and girlfriend Tami Lee Boothby, who’s been part of the project since the beginning doing  a little bit of everything, initially rented a central Florida house as the shooting site of their movie iPossessed, a few cows roamed part of the property.

Rimi revised his original script to incorporate cows into the story line. 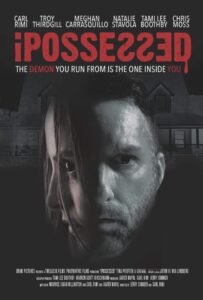 Then, after 17 months of pre-production, the pandemic struck, shutting everything down before shooting even started.

“I basically rewrote the script and turned it into a much more intense, scarier film,” Rimi said.

More than a year later, Rimi is finally ready to begin shooting the movie he wrote, co-produced, is co-directing and stars in. He and Boothby spent the past few weeks trying to solve those little issues and annoyances that always seem to appear prior to shooting. One such issue: the homeowner owner sold the cows during the pandemic and didn’t tell Rimi.

The great cow crusade – along with finalizing travel plans, securing equipment and purchasing props – forced Rimi to concentrate almost exclusively on the iPossessed project for the last couple weeks. He even felt the need to cancel a stand-up performance to devote more time to pre-production.

“I’m still going to do stand-up but my heart is doing this,” Rimi said.

The pandemic did yield some positives.

Rimi has previous production experience – his IMBD page lists 31 acting, writing, directing or producing credits – but this is the first project where he has a hand in all those roles.

Described as “A group of thirty somethings makes a pact with a demon to stay the night or someone loses their soul, only to find out the demons they are fighting might be the ones they carry inside,” on IMDB, iPossessed shooting begins next week in Lake Placid, Fla.

“I’m not trying to get famous,” Rimi said. “I just want to do it to make more movies.”

The shoot almost didn’t happen. The pandemic added to the cost of the production, prompting Rimi to sell his Honda Accord to help finance the project.

Upon hearing that story, local comic Warren Scott joined the project as a co-producer – giving iPossessed a boost of capital.

When I saw that he sold his car to finance this movie, I was like, Yeah, he believes in this thing,” Scott said. “Once I read the script, I was in. The script is fantastic. The fact that he was dedicated to it made me want to get in.”

Rimi has a relatively simple goal for the movie.

“I just want to do something I want to watch,” Rimi said. “I watch a lot of movies. I feel like the people sacrifice the story. I want to tell a good story and I want to have meaning behind that story.”

But the project is about more than creating art.

“We want to make money on this,” said Boothby, the leading actress. “It’s not just a passion project, it’s a business.”

The first few days of shooting will take place during the day, but most of the movie will be shot at night. The shoot is expected to take one month.

“If all goes right we’ll be having our rap party on May 26,” Rimi said.

The cast includes comics Troy Thirdgill as one of the leads, Chris Moss and Jackie Sanchez. Rimi foresees an iPossessed comedy tour to help promote the movie.

iPossessed doesn’t yet have timeline for release. Rimi expects the editing process to take several months, with some trailers potentially begin released as early as June.

Ultimately, iPossessed could be entered into a film festival or two, will appear in some theaters, and likely will be viewable on some streaming services.

At Home In The Sunshine After launching his...

Laughter In Lauderdale The scheduled opening of the...

Comedy Is The Cure An increasing number of...

True To Himself C.J. Landry learned earlier than...

Going Back To Cali Certain that the South...

Mic’d Up In less than six months South...

The #ApplausePlanner gets biblical in this week's selection, choosing the @JackieSanchez-headlined Angles and Demons show in #BoyntonBeach at the #TopShow. Is she an angel or demon? We'll learn on Wednesday. Read more here. #SFLComedy #Comics #Comedy https://applausebreak.com/angel-or-demon-applause-planner-jackie-sanchez/

Greg Hahn is performing tonight in #BocaRaton at the @Boca_BlackBox. If you missed him last week in #FortPierce - or even if you saw him there - here's a chance for a great Friday night of #SFLComedy. Here's why: @Hahncomedy https://applausebreak.com/the-wrath-of-hahn-greg-hahn/

Sean Finnerty took an unusual road to becoming a #Standup #Comic. Now, with his career still on the rise, the native of #Ireland is back in #Florida where it all began. Here he explains how it started and why he's back. @SeanyFinnerty https://applausebreak.com/sean-finnerty-full-circle/

August is going to be a heck of a month for comedy in #SouthFlorida. Added three new shows to the #ApplauseBreak events calendar. Thanks to Nik Macik for submitting them. #Producers and #comics, there's a link on this page to submit your shows. https://applausebreak.com/event-directory/

Last night created another convert for the #SFLComedy scene. #Austin-based #comic Roderick McDaniel and touring #comedian @shannon_mugrage had such a good time performing in #DelrayBeach that they can't wait to return to the #SunshineState. https://applausebreak.com/first-florida-foray-roderick-mcdaniel-shannon-mugrage/