Comedy Is The Cure

An increasing number of South Florida bars and restaurants are hosting stand-up comedy nights to draw patrons to their establishment.

DELRAY BEACH – Laughter is a preferred prescription for restaurants and bars attempting to recover from the COVID-19 pandemic.

A growing number of South Florida establishments are finding that stand-up comedy is not only entertaining, it’s also good for the bottom line. That’s why numerous places, from upscale Italian restaurants like Arturo’s Ristorante in Boca Raton to neighborhood bar Turtle Tavern in Delray Beach are adding stand-up comedy nights to their entertainment rotation.

When presented with the opportunity to bring a weekly stand-up show to the Dubliner, general manager Nick Mauriello didn’t hesitate.

“It’s actually brought a lot of our regulars back to the Dubliner,” Mauriello said. “It’s bought a lot of smiles on faces, most importantly. That’s what we need after the pandemic. So to do a free comedy show, we’re more than happy to do that.” 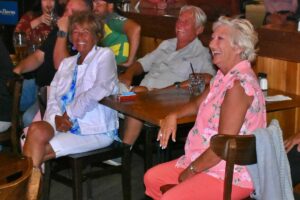 A table enjoys the South Florida comedy show at the Biergarten in Boca Raton. (Photo by Chuck King / Applause Break)

“To see that we are able to pack the house like we did [Wednesday] night for a free show – it’s been great for our sales,” Mauriello said.

Less than a mile South on Federal Highway, the Biergarten has drawn some of comedy’s biggest names to its stage.

Sadman Comedy Productions had been producing comedy shows Biergarten, which features a large stage and good lighting, before the pandemic arrived. 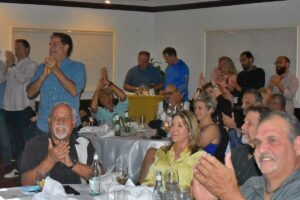 It’s not shocking to see hilarious comedy shows at clubs dedicated to South Florida comedy – like the Palm Beach Improv – or at theaters like the Boca Black Box or Fort Pierce’s Sunrise Theatre on weekends, but the quality of performers at local bars during the week often surprises unsuspecting patrons.

Like the Biergarten, Delray’s Turtle Tavern brought stand-up comedy shows back as quickly as possible following the loosening of pandemic restrictions.

“I was doing the comedy nights for the past couple of years, but only every three months and a special event,” said Turtle Tavern owner Beverly Diamond following a show earlier in the year. “But now I have to do it more often because it’s the only way to fill the bar.”

Earlier this year Sadman brought Ernst – a nationally touring comic with a recurring role as Cousin Louie on the Netflix Show Cobra Kai – to the Turtle, a small bar on Military Trail.

“That was amazing,” Diamond said. “Every show is awesome. The comics are great, and everyone needs to laugh these days.”

Unlike the Biergarten, which offers free shows, the Turtle Tavern charges a modest ticket fee to attend the event. As a result, audiences attending those shows are often more engaged and accepting of the comedy performances because they are invested in the show.

Comedy shows held in bars and restaurants do have their challenges. Some general managers mentioned initial concerns about comics potentially driving away customers, particularly families with children, by using foul language or sexual material – though no GM or owner saw this potential problem materialize to any significant extent.

While the free shows have the potential to draw larger audiences, not everyone at those shows are as interested in comedy – creating a potential obstacle for comics looking to tame a room.

“You have to make a connection because the bar shows, [the crowd is] not always interested like they are at the Improv and other comedy clubs,” said comic Nadeem Awad, who bringing comedy back to Delray’s Wine House Social – formerly N2 Wine Bar – on July 6 for the first time since the pandemic’s onset. “You have to grab the people within one minute of a bar show otherwise you’re not going to get them at all.” 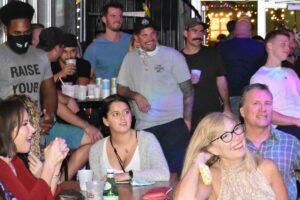 The Dec. 29 show at Delray’s Tin Roof that included national comics Jimmy Shubert and Bret Ernst likely was the best comedy show in the country that day. (Photo by Chuck King / Applause Break)

Thus far Bellak has produced four of the now twice-monthly shows, with the most recent Monday show displaying a strong uptick in attendance.

“I’d say probably half the crowd if not more than that, they were new faces to the bar,” Levy said. “Hopefully those new faces, we’ll see them again on non-comedy nights.”

If nothing else, the comedy shows are helping bar fans forget about the struggles of the past 16 months, if only for a few hours.

“It’s refreshing to hear everybody laughing – especially after the year that we’ve all been through,” Mauriello said.

Rimi at the Roof

Two For The Show Lalo Rodriguez and Stephanie...

Comics Gambling On Themselves Friday night at Delray...

Win Your Way In The Laughing Spree Fest...

A Gem Of A Story Comic Bryan Sobolewski's...

It’s Going Down in Martin Stand-up comedy is...

Many #SouthFlorida comics will step onto the @DaniaImprov stage on Thursday for the first time. #ApplausePlanner says that's the place to be this week. Other notable shows include @NickDiPaolo and Adam Ray. #SFLComedy #ApplauseBreak https://applausebreak.com/applause-planner-fresh-faces-in-dania/

Added a handful of shows to the #ApplauseBreak events calendar. This week's #ApplausePlanner is coming later today. Still time to submit your shows. Click the Submit button on the Events page. #SFLComedy #SouthFlorida #PBC #Broward https://applausebreak.com/event-directory/

Let's have some #fun. It's #TalkLikeAPirateDay. We asked #SouthFlorida comics to give us their best #pirate impression - or their thoughts on the day. Their answers are #funny. Thanks to @BollingNico, @JackieSanchez, @Warrenk, @danlongcomedy and @RobbKalert for helping.