BOCA RATON – Comic Zach McGovern received a welcomed surprise down the front of jeans on Thursday night – a $50 bill.

Midway through his 40 minute set, a woman in the audience decided tipping the comic the traditional way – putting bills in the on-stage tip jar – simply wasn’t a strong enough way to show her appreciation.

Instead, Linda Alwais walked from her table to the elevated stage and to much fanfare stuffed the $50 down the front of his jeans.

“I’ve been doing comedy for 12 years,” McGovern told the audience. “No one has ever stuck money in my waist band while I was doing comedy.”

The experience wasn’t totally novel for McGovern, who says that at times while bartending and at private parties he’s been tipped in such a manner.

“I definitely had some money shoved in my pants then, but never onstage as a comedian,” McGovern said. “I liked it. It was new to get a $50 bill brushed up against my ball sack.”

Alwais and a group of her Boca Raton High School Class of 1982 classmates had their own table at the Biergarten in Boca for the Sadman Comedy Productions show headlined by McGovern.

She praised all the comics on the bill, but was particularly enamored with McGovern.

“Hilarious,” Alwais said. “So funny. Quick witted. Just went with the flow, with the crowd. We love him. He’s the best.”

As for her method of showing her appreciation, Alwais said that’s common to the area – although no one can ever remember it happening at a previous Biergarten show.

“Because it’s a Boca thing,” Alwais explained. “You’ve got to show the love up in here.”

Not everyone at her table was as enthralled with McGovern. 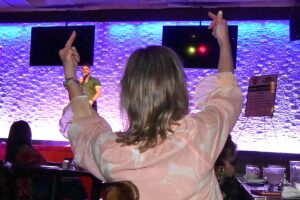 One friend took umbrage at McGovern pronouncing the city “Boca Ra-TONN” rather than Boca Ra-TONE.” She initially yelled to the stage to correct him, and when McGovern mispronounced it again she displayed her displeasure by giving him the middle-finger salute – first with one hand, then with both barrels.

“I thought she was going to literally come on stage and stab me,” McGovern said. “You didn’t see her eyes. She looked pretty angry.”

McGovern, a New York City resident, headed back to the Apple, but could return to South Florida within the next couple of weeks.

By the end of the year he’s hoping to have recorded a video special.

“I’d like to hopefully by the end of the year put out at least a YouTube special,” McGovern said. “Cause if the industry doesn’t come calling for you, you’ve got to go to them.”

Stand-Up Rundown: Kreischer Is The Machine

Blood, Laughs and Cheers Less than a month...

A Voice From The Top Rope Lessons learned...

Ready For Everything Florida Comic, television personality and...