The upcoming Jersey City Comedy Festival is looking for comics, Steve Martin rather than Tom Cruise, and more in the Stand-Up Spotlight.

DELRAY BEACH – It’s no secret that many Floridians, including Florida comics, are transplants from the New York area.

And many Florida comics like to visit the New York area, often grabbing some Big Apple stage time as part of the trip.

With that in mind, we wanted to alert South Florida comics to the upcoming Jersey City Comedy Festival, which takes place from June 7-10 in – you guessed it – Jersey City, across the Hudson River from NYC.

The submission process runs through March 1. Comics interested will have to supply a video and pay an application fee – $20 before Feb. 1, $30 afterward. In years past representatives from significant New York comedy clubs have served as judges.

We know South Florida is loaded with quality comics. Having some locals rocking the northeast would be pretty cool.

Also in today’s Stand-Up Spotlight is news that Steve Martin might have been the first choice for what would become one of Tom Cruise’s most prominent roles, and a Q&A with comedian Alex Edelman. 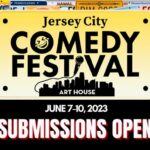 Selected comedians will perform 4.5 minutes in one showcase on either June 7, 8, or 9 between 6:30pm – 10:30pm where they will be seen by an industry judge and audience. Two comics will advance from each showcase (1 audience pick + 1 industry pick) to perform 6 minutes in the final ‘Best Of The Fest’ show on Saturday, June 10, 8:00pm – 10:00pm. This year’s winners (1 audience pick + 1 industry pick) will each receive a $500 cash prize. Industry winner will get spots at clubs in NJ and NYC. All 10 finalists will receive multiple spots at The Laugh Tour Comedy Club in Jersey City.

Stanley Kubrick is one of the most famous and talented directors in the history of film; with films like 2001: A Space Odyssey, A Clockwork Orange, Full Metal Jacket, and The Shining, his work has become a thing of legend. Of course, for the younger crowd, he is known best for his work on his final film, the sexy thriller Eyes Wide Shut. However, according to Slash Film, Stanley Kubrick had planned to make the movie long before, with Steve Martin in the role instead of the Hollywood megastar Tom Cruise.

Interview: Comedian Alex Edelman on Judaism, Internet Hate and his new show JUST FOR US at the Menier Chocolate Factory What would you do if you were receiving hate on the Internet? Would you ignore it? Block and report the users attacking you? How about going to a White Nationalists meeting in New York City? For Alex Edelman, the American stand-up comedian, that was the answer.

Recently, BroadwayWorld had the chance to speak with Edelman about his show and what he’s looking forward to when performing it in London, the place where the first workshop took place.

Click here to view original web page at Interview: Comedian Alex Edelman on Judaism, Internet Hate and his new show JUST FOR US at the Menier Chocolate Factory