Comedian Simon Evans compares comedy to art, nature and sports - a review of Andrew Santino's special and more in the Jan. 12 Stand-Up Spotlight

DELRAY BEACH – Is stand-up comedy a form of art?

Veteran British comedian Simon Evans says, for the most part, no.

A recent article appearing in The Critic, Evans says comedy is more akin to nature – because a joke’s relevance dies – or to sports, because comics adopt the mentality of winning the night.

Evans uses a new Steve Best book titled “Comedians” as the lauching point for his thesis. A comic as well as accomplished photographer, Best’s book is a backstage photo gallery of stand-up comics – and looks interesting as well.

A link to the Evans article, entitled “The Game of Laughter,” appears below. It starts slowly, but stand-up comedians and comedy fans interested in the art of comedy should find his take interesting and thought provoking.

Lots to unpack below. As always, let’s keep it funny, folks.

The game of laughter

There are very few forms of expression quite as ephemeral as stand-up comedy. It is the mayfly of the creative arts. You can’t even wrap chips in it.

It shares with music a dependency on rhythm — often referred to as timing, though this arguably evokes only the correct pause before the punchline arrives and really, there is a lot more to it than that. The punchline is the easiest bit to time — it should come after the amount of time it would have taken to draw on a cigarette before delivery. Even a twenty-minute set should have fast and slow movements, though, move smoothly from bolero to rhapsody to andante to crescendo all without alerting the audience to there being anything fishy going on. That’s why it’s a secret.

Unlike music, stand-up comedy’s time is short. It has a best-before date — one that can make pears look like an endurance fruit.

Andrew Santino made his stand-up comedy special debut on Adam Devine’s House Party in 2013. Since then, he’s released two specials, including his last one that debuted in 2017 on Showtime, Home Field Advantage. He returns to the stage with his first Netflix special in Andrew Santino: Cheeseburger. Is the special worth checking out? Let’s dive in.

The special was recorded in Denver, Colorado, where we have a straightforward opening for Andrew as the host announces him to come to the stage. Then, on the stage, we’ve got quite an array of things happening, from a bar stand that has alcohol on it and a cigar chair that has a stand with a drink next to it. I am not sure what’s going on, but I like the vibe.

Joe Eurell, a comic with cerebral palsy, uses laughter to lift himself, others up 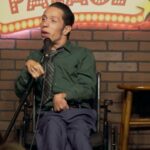 As a stand-up comedian with cerebral palsy who uses a wheelchair, Joe Eurell might have the hardest profession when it comes to being a person with a disability. But when it comes to telling jokes, he sees his unique traits as a way to lift himself above the crowd.

Click here to view original web page at Joe Eurell, a comic with cerebral palsy, uses laughter to lift himself, others up

‘People Felt Okay with Yelling Racist Stuff at Me’: Kumail Nanjiani on Starting His Stand-Up Career Right Before 9/11 The origin story of countless comedians begins with them graduating college and immediately dedicating their lives to the grueling world of open-mics and bringer shows. It’s a harrowing task to crawl out of those trenches and into comedy superstardom — now imagine starting that quest as a Pakistani-born Muslim American mere months before the 9/11 attacks. That’s what Kumail Nanjiani faced when he began his comedy career in 2001, and it’s part of what makes his journey so impressive — and so daunting.

With the Nanjiani-starring series Welcome to Chippendales coming to a close, the actor and comedian took time to reflect on his performance as Somen “Steve” Banerjee, the real-life proprietor of the all-male strip show who followed his ambition to a grisly end. Nanjiani told The Guardian that, in order to play the complicated and corrupted character, he needed to find a personal connection to the kind of powerful determination that would compel a person to commit acts as unthinkable as those done by Banerjee in the late 1980s.

Click here to view original web page at ‘People Felt Okay with Yelling Racist Stuff at Me’: Kumail Nanjiani on Starting His Stand-Up Career Right Before 9/11