BOCA RATON – The photo is silly, pointless and meaningless.

That’s why Matt Durndak likes it so much.

Following a June 2018 gig at a now defunct Greek restaurant – and long before Applause Break was even a thought – a photographer hired to shoot the gig snapped a picture of Durndak enjoying a plate of chicken wings.

That photo quickly made its way back to Durndak, who promptly installed it as his profile pic on social media. 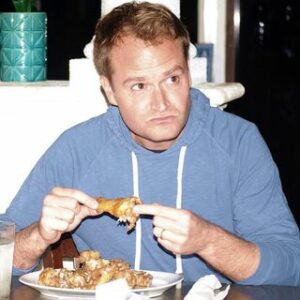 “It’s candid and it’s just kind of nonsense.” Durndak said. “It’s pretty clear what I’m doing. It’s a simple thing. Who would take that photo in the first place? Who would use that as their profile photo? But it’s also not disgusting. Yes, I’m eating, but it is not a mess. I just think it’s unique.”

Unique it is. While most comics default to a photo of them performing or a promotional head shot as their profile picture, Durndak may be the only comic eating chicken wings for all the world to enjoy.

“Is Durndak performing? Is the chicken wing performing? I don’t know, but I’ve got to be there. That’s what it does,” Peruski said.

On Thursday night Peruski was there, headlining the Sadman Comedy Production show at Boca Raton’s Biergarten, with Durndak serving as a the feature comic.

“I was able to spend a couple years here really doing time and developing longer sets, getting paid to do comedy,” Durndak said.

The now famous chicken wing picture occurred during that period.

“I love chicken wings. You remind me of chicken wings,” said Durndak, looking across the table at the photographer who took the shot. “I will never take it down until there’s a reason. I don’t know what the reason would be. I guess until I have something better.”

Durndak spent the past couple years in Los Angeles headlining some shows and traveling for others, but the COVID-19 pandemic severely limited his opportunities to perform.

“I’m much worse because there wasn’t much going on in LA for a year,” Durndak said. “I did a couple road gigs, but otherwise, LA was open for a little bit – did some outdoor shows – and then they closed down again.”

The day job had him back in South Florida for the past couple months, and if Durndak was rusty from his LA layover it didn’t show on Thursday. Mixing crowd work with some set bits, his low-key delivery kept the audience attentive and laughing.

“As much as possible, I try to riff on what’s happened earlier tin the show,” Durndak said. “I haven’t really developed a lot of new material in the last two years because I haven’t really performed.”

Thursday’s Biergarten show may be the last time South Florida audiences get to see Durndak perform, at least for a little while.

Next week the day job is bringing him back to Los Angeles – which, when open, is home to a comedy scene that invigorates Durndak.

But Durndak expects to return to South Florida in a few months, doing what he loves.

“I need to get back into more comedy – and more chicken wings,” Durndak said, laughing.

It’s Going Down in Martin

Two For The Show Lalo Rodriguez and Stephanie...

Win Your Way In The Laughing Spree Fest...

A Gem Of A Story Comic Bryan Sobolewski's...

It’s Going Down in Martin Stand-up comedy is...

Many #SouthFlorida comics will step onto the @DaniaImprov stage on Thursday for the first time. #ApplausePlanner says that's the place to be this week. Other notable shows include @NickDiPaolo and Adam Ray. #SFLComedy #ApplauseBreak https://applausebreak.com/applause-planner-fresh-faces-in-dania/

Added a handful of shows to the #ApplauseBreak events calendar. This week's #ApplausePlanner is coming later today. Still time to submit your shows. Click the Submit button on the Events page. #SFLComedy #SouthFlorida #PBC #Broward https://applausebreak.com/event-directory/

Let's have some #fun. It's #TalkLikeAPirateDay. We asked #SouthFlorida comics to give us their best #pirate impression - or their thoughts on the day. Their answers are #funny. Thanks to @BollingNico, @JackieSanchez, @Warrenk, @danlongcomedy and @RobbKalert for helping.